Activity is not achievement 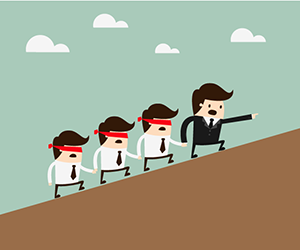 There is a type of caterpillar called a processionary caterpillar, so named because one will establish a direction and all the others will fall in very closely behind and move in the same path.

The follower’s behaviour becomes so automatic that their eyes become half-closed as they shut out the world around them and let the leader do all the thinking and decision making about which direction to pursue. Their behaviour is rote and automatic.

An experiment by the French naturalist Jean-Henri Fabre demonstrated the rigidity of the processionary caterpillars’ behaviour when he enticed the leader to start circling the edge of a flower pot. The other caterpillars followed suit in tight procession, forming a closed circle in which the distinctions between leader and follower became totally blurred, and the path had no beginning and no ending. Instead of soon getting bored with the non-productive activity, the caterpillars kept up their mindless search for several days and nights until they dropped off the edge through exhaustion and starvation.

Relying totally on instinct, past experience, custom, and tradition, the caterpillars achieved nothing because they mistook activity for achievement.

How can we prevent ourselves and others from becoming like the processionary caterpillars?

Do not confuse activity for achievement.