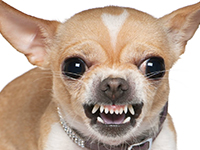 A lady takes her pet Chihuahua with her on a safari holiday. Wandering too far one day, the Chihuahua gets lost in the bush and soon encounters a very hungry looking leopard.

The Chihuahua realises he’s in trouble, but, noticing some fresh bones on the ground, he settles down to chew on them, with his back to the big cat. As the leopard is about to leap, the Chihuahua smacks his lips and exclaims loudly, “Boy, that was one delicious leopard. I wonder if there are any more around here.”

The leopard stops mid-stride, and slinks away into the trees.

“Phew,” says the leopard, “that was close – that evil little dog nearly had me.”

A monkey nearby sees everything and thinks he’ll win a favour by putting the stupid leopard straight. The Chihuahua sees the monkey go after the leopard and guesses he might be up to no good.

When the leopard hears the monkey’s story, he feels angry at being made a fool and offers the monkey a ride back to see him exact his revenge.

The little dog sees them approaching and fears the worse.

Thinking quickly, the little dog turns his back, pretends not to notice them, and when the pair are within earshot says aloud, “Now where’s that monkey got to? I sent him ages ago to bring me another leopard…”