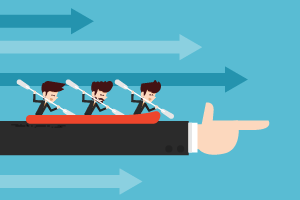 As we all know from being a member of a team, the success of the group—and indeed the entire organisation—can depend a lot on the dynamics that exist within the team. Think briefly about the team you spend the most time within. No doubt you will be able to conjure up a selection of characters who all fill different roles within the group. One may be the dominant voice, another may be the problem solver, someone else may be the conflict manager, and the formal leader of the group emerges clearly as that one person who has the power to make the final decision.

While you or someone else in the team may be recognised as this formal leader, you may also have an awareness of a different kind of leader within your team, someone who seems to have an uncanny ability to influence people and promote change; namely, the informal leader. Often charismatic, distinctly loyal and influential, informal leaders are not usually designated by the organisation as a formal ‘leader’, but there is something about them that makes them stand-out and have a definitive sway over the performance and outcome of those around them.

With a bit more awareness of what informal leaders can bring to your organisation when properly nurtured, you can find industrious ways to partner with them that can initiate substantial change and company-wide improvements.

CHARACTERISTICS OF AN INFORMAL LEADER

While few studies have delved very deeply into the formal leader’s role in encouraging or discouraging the emergence of informal leaders, the ones that have been completed have provided some pivotal information. To best utilise your informal leaders, you first have to be able to recognise them. Knowing some key characteristics can assist you early on in the process:

Clients of Leadership Management Australasia licensee Suzanne Wilson knew they had an informal leader in their team when they recognised one of their top agent’s work ethic and natural leadership skills. Charlotte and James Marshall own several Harcourts Charlton Realty offices in Auckland; the scope and workload means they rely heavily on having informal leaders within their teams.

“Mike [Robson] works as a senior sales consultant alongside a team of six or seven other agents. He has a style that is emulated by others. He is calm, considered, focuses on helping others and acts as a sounding board and mentor to everyone he works with,” Charlotte Marshall explains.

“Mike has no ego and is well respected within the office and the community. This behaviour then rubs off on the team. Mike also attends anything that is put on by the business and supports the business by modelling the way for others. The fact that this is authentic behaviour and not forced means it has even more impact,” Charlotte says.

Do you know someone in your organisation who sounds similar to Mike? If so, it is likely you have found an informal leader who is waiting to be developed and utilised.

INFORMAL LEADERS: HOW TO SEEK THEM OUT

While HR professionals and team leaders often do recognise that shared leadership brings benefits to team performance and ultimately organisational success, understanding how to create the conditions for informal leaders to emerge and facilitate change
still remains a challenge.

After you have identified who your informal leaders are, it is important to have an actionable plan so HR managers can successfully nurture them for the betterment of the entire team.

Formal process. Perhaps most obvious and traditional is to perform regular performance interviews. Traditional HR tools such as this can help open up the discussion regarding further training or development in the future as part of a larger plan for their career path and choices. While this doesn’t necessarily have to lead to a formal promotion, you have acknowledged the informal leader and tacitly have encouraged them to be a positive influencer within the organisation through your trust in them.

Invite them to the table. The leader contributes to the security of the group by providing information readily and openly with their team members. While you may not be able to share everything with the informal leader, it is useful to consider their opinion and influence when decisions are being handed down from upper management. Their insight and influence within the employee network can be invaluable when trying to gauge reaction to intended changes or developments that will affect all staff.

WHY ARE INFORMAL LEADERS SO IMPORTANT?

There is no one way or shortcut to seeking out your informal leaders; it takes a manager with strong relationships with their team to be able to dedicate the time and effort to get to know their informal leaders and see the potential they can bring to the entire group.

So, why should you take the time to seek out and recognise your informal leaders?

The ever-shrinking traditional middle layer of management has effectively been replaced by a variety of different individuals fulfilling roles as project and product and team leaders. Often, your informal leaders will be these workers, those getting busy and getting work done. They often seem to be on a mission to change the world, or at least improve their organisation for the better.

For Charlotte and James Marshall, having an informal leader like Mike on the team means that everyone benefits from his presence.

“In a sales environment where it is often highly competitive, Mike supports the Charlton Realty philosophy of ‘everyone helps everyone’. He isn’t the brand manager and he isn’t asked to do these things—it just happened. People like him, they want to be successful like him and so they do what he does,” Charlotte explains.

From Charlton Realty’s perspective, it is clear that by taking the time and making the effort to know who their informal leaders are, they are able to better implement their strong company culture and more clearly navigate other staff towards even higher and more focused achievement.

Knowing who fits into what role within a well-functioning team can be the difference between a high-performing team and a one that consistently underperforms and underwhelms.

To best cultivate the talent that you have, the issue of building and supporting informal leadership has to first transcend the day-to-day operations and concerns of your organisation; it has to be a focus for the greater development and transformation of the place and the people around you to match the ever-changing and challenging world.

For Theo Fryer at Commercial Door Services in Christchurch, the informal leaders in his team have been developed through additional training as well as in practice through their specific roles within the team.

“There are many roles within the business that don’t have the title leader, but where people actually need to take on leadership responsibilities,” says regional manager Theo. “Kyle, one of the Commercial Doors team members who recently attended a leadership development programme with LMA (Leadership Management Australasia), is one of these people.

“Recently, Kyle has been acting as a mentor or coach for a new team member. This is not a formal arrangement; however, he has taken on the responsibility of growing and developing this person and sharing his knowledge to help him,” Theo says. For Theo and his team at Commercial Door Services, developing their informal leader Kyle through training and then substantiating this with opportunities for on-the-job development has been key to achieving the team’s greater strategic development goals.

However, as with most things to do with informal leadership, there are numerous directions you can take when choosing to develop their influence and position within the team.

Consider promotion, but not as a given. While it may seem that promoting informal leaders to formal positions of power makes sense, it can also be a case of too much power and not enough training or preparation. Take all repercussions and benefits into account before proceeding with a promotion of influential informal leaders, and ensure the informal leader is consulted throughout the process about their genuine career aspirations.

Utilise your early adopting informal leaders. By involving your adept informal leaders in performance pilots or team developments, you are entrusting them to be the first to experience and evaluate changes and provide their insight into them. By doing so, you are fulfilling their desire to be more involved with important decisions and development, while also gaining a support system for the changes you are intending to implement with a sturdy influencer behind it in your informal leader.

In the case of Commercial Door Services, for example, while Kyle wasn’t formally promoted, Theo noted: “Without this sort of informal leadership, the time for staff to be inducted would be considerably longer and therefore impact the bottom line.
The most important characteristics Kyle has that make him an informal leader are his strong values and care for others, as well as his ongoing support of the business.”

Allow room for people to move beyond traditional boundaries. You and your informal leader will succeed if they are encouraged to create value and build their own sense of ownership across the organisation. Work with them to develop new projects and allow room for them to grow and experiment with what is possible. In a modern marketplace where speed, flexibility and adaptability have never been in greater demand, existing leaders would be well served to think of informal leadership cultivation as a key management tactic not just to get work done, but to traverse the current boundaries holding back the multitude of talent.