Gender inequality and pay gaps still rife in the workplace 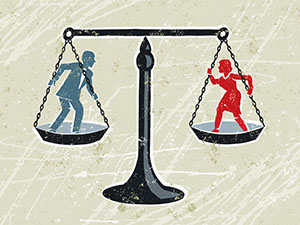 New data released by the Workplace Gender Equality Agency shows that women in management ranks get paid less than their male peers.

Based on full-time total remuneration, the largest gender pay gap occurs at key management personnel level (28.9%), followed by other executives / general managers (27.5%) then other managers (24.6%) and senior managers (23.5%).

This data reveals for the first time how the gender pay gap exists at every level of management across the Agency’s reporting population of over 11,000 employers.

The Leadership, Employment and Direction (L.E.A.D.) Survey commissioned by Leadership Management Australasia found that there is a stark difference between the views of men and women on the prevalence of gender equality in the workplace across a number of areas. The survey has been undertaken for 15 years and has involved thousands of organisations and more than 42,000 employees, managers and leaders.

Leadership Management Australasia’s L.E.A.D. Survey director, Adrian Goldsmith said, “It’s time employers woke up to the massive differences in the perception of gender equality in the workplace and the potentially highly negative impact on performance and productivity in, and leadership and management of, our organisations. For too long, these perceptual gaps, which are now clearly backed up by evidence of real gaps in terms of pay inequality, have been allowed to perpetuate – and in doing so, inequity has continued to reign.”

The latest data from the L.E.A.D. Survey data demonstrates a difference in experience between men and women at all levels of the organisation. In many areas men are significantly more likely to believe the situation to be better balanced, where women report that men are still winning the so-called gender war. This highlights the significant room for improvement that needs to be addressed by leaders and managers.

“Closing the gap between the genders on this front is a matter of fairness that all leaders and managers of both genders should have at the forefront of their minds,” Adrian said.

Click here to view the full L.E.A.D. Survey data on equality in the workplace.