Lead by purpose, not position or power 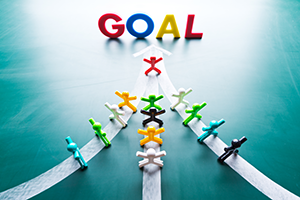 Satisfaction with the standard of leadership in organisations is declining and may be affecting productivity growth. Reasons for the declines, and how to develop a leadership style that can reverse them, were outlined at a recent seminar conducted by Leadership Management Australia (LMA).

A significant reason for the adverse trends may be that more is expected from leaders than ever before.

The seminar quoted the following statistics:

In this context, a halving of the rate of productivity increases over the past decade is easier to understand.

Gap between leaders’ and employees’ view of leaders’ performance

LMA regularly conducts a survey of management practices called the Leadership Employment and Direction (L.E.A.D) Survey. Like other similar surveys, it has found leaders tend to rate their own performance more highly than their employees rate it.

Statistics from the latest LEAD survey include:

When asked to nominate reasons why leadership failed, more than two-thirds nominated poor interpersonal skills (ie the ability to interact with and influence others) as a major reason, versus 45 per cent for personal skills and only 15 per cent for technical/business/knowledge skills.

The increased complexity of leadership roles as discussed above, plus constant pressures to “get it done now” by relying on established procedures and compliance requirements, appears to be a major contributing factor.

Gaps in learning and development

Randy Slechta, CEO of Leadership Management International, said that while the benefits of investment in training, learning and development are not questioned, there is evidence the investment is often misdirected.

One disturbing statistic is that the level of senior management satisfaction with leadership development in their organisations has fallen steadily from 53 per cent in 2003 to only 19 per cent in 2014 – although one of the reasons appears to be that the issue now receives greater scrutiny than it used to.

Only about 30 per cent of what is learned from training and development is actually used on the job.

Stages of learning and development

Slechta said that leaders will be at one of the following four stages of performance, and training and development should aim to take them to the fourth stage:

Slechta suggested this is why Australian engagement surveys typically report that only about 25 per cent of employees are actively engaged at work and the majority (about 60 per cent) are only passively engaged.

Leadership by purpose the desired model

About 97 per cent of leadership models in organisations are “transactional”, based on position and/or power. The big challenge for learning and development is to move them to the model of “leadership by purpose”, currently practised by only about 3 per cent.

Leadership by position is based on command and control principles, using fear and consequences to enforce conformity.

Leadership by power is the most common model. It relies heavily on monetary rewards, incentives and sanctions. This has several drawbacks:

Leadership by purpose requires work to have meaning to employees, who are intrinsically motivated.

Various studies have found that intrinsic motivation results in major gains in engagement, innovation and work performance generally for both leaders and their employees. Features of the workplace include high self-motivation, trust, responsibility and accountability.

However, it can take a lot of time and effort to build relationships. Leaders under time, cost and results pressures find it easier to default to one of the other two styles – again, the “get it done now” edict. Therefore, a supportive organisation culture that encourages and supports people to take ownership of what they do is crucial to reaching the “leadership by purpose” (or transformational leadership) model.