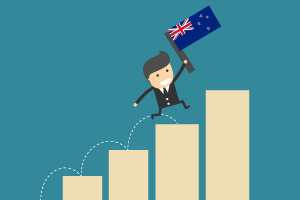 New Zealand business leaders’ confidence in their organisation’s growth outlook surged in the last 10 months while the outlook of leaders in Australia was almost static, a business survey has found.

The Leadership Employment and Direction (L.E.A.D.) Survey on workplace trends conducted by Leadership Management Australasia has found that at June 30 last year, 46 percent of New Zealand leaders and senior managers believed their organisations were growing but in the survey closing April 30 this year the figure had jumped to 69 percent.

Over the same period, the Australian figures have moved from a similar base of 48 percent to just 52 percent.

The L.E.A.D. Survey has been running 15 years and is conducted by Chase Research for Leadership Management Australasia (LMA) which has been delivering improvements to performance and productivity to over 130,000 people from thousands of organisations across Australia and New Zealand for more than 40 years, the company says in a media statement.

The latest results from the L.E.A.D. Survey indicate that middle managers and supervisors in New Zealand shared this view (49 percent to 65 percent), whereas in Australia the view is very much the reverse with fewer middle managers/supervisors believing their organisations are growing (44 percent to 37 percent).

Instead, a larger percentage of Australian respondents see a holding pattern or perceive their organisation to be shrinking, compared to their NZ counterparts (18 percent in Australia compared with 3 percent in NZ).

Again the contrast in outlook is stark with 11 percent of Australian employees believing their organisations are shrinking compared with 0 percent in NZ.

The L.E.A.D. Survey has been running 15 years and is conducted by Chase Research for Leadership Management Australasia (LMA) which has been delivering improvements to performance and productivity in over 130,000 people from thousands of organisations across Australia and New Zealand for over 40 years.

LMA CEO, Andrew Henderson said there was an emerging aura of optimism in New Zealand workplaces.

“They also have higher levels of confidence about their economy and the prospects for productivity achievements and improvement in their organisations,” he said.

“This positive attitude to the outlook may be a self-fulfilling prophecy – New Zealand organisations may indeed enjoy a better future than Australia organisations simply by talking and acting ‘above the line’.”

“Ramifications of this New Zealand confidence for leaders and managers in Australia include the prospect of their talent shifting attention to opportunities in New Zealand,” he said.

“Australian leaders and managers therefore need to be sending the right signals to their people about what the future holds rather than keeping them either ill-informed or uninformed about their organisations’ and their personal future.”

For New Zealand organisations, Mr Henderson suggested the talent war seen in Australia during the 14 years of economic sunshine might emerge in New Zealand on the back of greater demand and growth.

“Leaders need to ensure their people are engaged and growing roots to prevent departures in search of greener pastures,” he said.