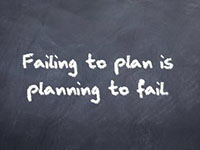 83 percent of leaders and managers claim to have a business plan for 2014, but only 66 percent of employees believe their organisation has a plan.

The latest results from a 10-question survey, as part of our ongoing 14-year monitor of Australian and New Zealand workplace trends, the Leadership Employment and Direction (L.E.A.D.) Survey, showed some organisations are not effectively communicating their business plan to employees.

The CEO of LMA, Andrew Henderson said it was disturbing to discover that while almost all leaders, managers and employees recognised a plan was essential to secure the future of their organisations, one third of employees believed their organisations had started the new work year without one.

“In these uncertain economic times, failing to plan is in effect planning to fail,” he said.

“The plan starts with leaders clearly identifying the vision and plan, clearly communicating the goals, direction and vision and then having the confidence in themselves as well as gaining the confidence of their people to execute the plan. Leaders have to ‘walk the talk’.”

Planning contributes to growth and success, he said, which is borne out in the survey’s correlation between organisational growth status and the presence of a plan.

In contrast, organisations thought to be “Shrinking” or “Just Surviving” 76 percent and 67 percent respectively have a business plan for 2014.