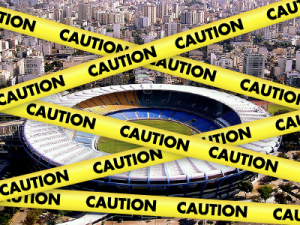 With the Rio Olympics underway, there has been a definite tension running under the surface that has little or nothing to do with athletic rivalry. The source of the tension? The rough road to Rio in the form of stadium constructions debacles, the Zika virus, filthy water and facilities, explosions, the almost expected doping scandal and the odd mugging or two of athletes and tourists.

In some, if not most people’s minds, things have indeed gone too far for the 2016 Olympics to be considered a shining beacon of success. Although adjustments have been promised and resolutions have been put in place, the fingers of blame are still being pointed every which way. No matter where the blame lands, each issue that has plagued Rio can be viewed as part of a narrative regarding the necessity for effective and long-sighted risk management.

Risk management has long been at the heart of the governance model for the Olympic Games and the Olympic movement. This is not only due to the growing scale and complexity of the event, but also due to the amount of global scale planning required, and equally relevant regional vulnerability that can be exposed when hosting such an event. For Rio, these risks have emulated from the realms of security, public health, natural ecology, technology and economics, both at the global and local scale. In many negative ways, Rio has already shattered the records for the number and volume of problems facing a single Games.

Although thinking on a risk management level to rival the Olympics will likely never fall upon one person or small team, there are some individual lessons that Rio’s shortcomings and successes can teach about how to manage risk well, and how to remain strong through potential disaster.

Clear and honest identification of risks

The first step in any risk management strategy is to properly and thoroughly identify the potential threats and risks to a project. Only by developing an awareness of what could happen can you stand any change of doing something about it. Unfortunately for Rio, although many of the risks may have been partially known internally, the opportunity to conduct an external and more thorough risk analysis appears to be one of the causes of many of the now ingrained issues.

By tackling the risks head on, the possibility of intersecting problems before they occur inevitably increases. There are many tools that can be implemented when conducting a risk assessment, many of which are relatively easy and cost effective:

Evaluate and decide how to handle each risk

After the risks have been identified, each point of risk needs to be issued a measure to determine how likely it is to happen, and what level of resources and man power should be allocated to properly control the risk from occurring.

In Rio’s case, perhaps the most long standing risk issue has been a health one. Although the Zika virus was originally discounted as an issue in Rio by the IOC in January of this year, this was later discovered to be because Brazil’s Ministry of Health temporised until February to declare it to be a notifiable disease and begin counting cases. Now with the data finally available, the situation seems not so safe.

With the proper information, the risk allocation can run as simply as using a five-point scale:

Alongside the right allocation comes the four main strategies of risk management:

Each strategy has its own advantages and disadvantages, and it is more than likely that each strategy will be used in part to contend with a variety of risk related issues. For the Zika virus, the allocation has moved from the ‘Unlikely’ to ‘Likely’ point on the scale. Has the corresponding strategy to combat this been adequately addressed? This is an issue perhaps only time will tell.

Confidence to rely on the true and tested

The Olympics is an event that ideally fosters the best in everyone involved. From the athletes of every nation being given a shining stage to compete upon and form lifelong bonds beyond race and nationality, through to the host city’s opportunity to share the best of what it has the offer, it is an event on a truly inspiring, global scale.

For Rio, the risks involved in hosting the Games under the circumstances have been truly astronomical in scale and variety. However, there is something truly charming about the way the Carnival city is taking it all in its stride, with warmth, personality and a love of life. Although the risks involved appeared to outweigh the benefits of carrying the weight of the Olympic torch, Rio has relied on the intrinsic assets that exist within the country to provide the best possible antidote to the worst; an infectious national friendliness and willingness to host the vastness of the world in its national backyard.

The shining light at the end of any risk analysis for Rio lies in what keeps the country strong and what its core values are. Similarly for any one person, business or organisation looking to face the certainty of risk, there is a necessity to remain dedicated to the reason why the risk is being ventured in the first place. For all the trouble, cost, headaches and trepidation that can come with risk management in the face of change or daily operation, the ability to rely on the good in the face of the possibility of the bad will steer any one person, organisation or nation ever closer towards victory.