The sky is the limit – gender equality in the workplace 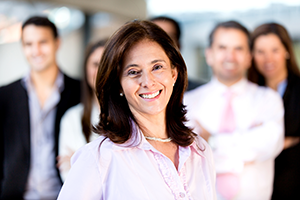 Workplaces have gender equality in their sights

Women working full time now earn almost $300 less each week  than male counterparts, according to the Australian Bureau of  Statistics. The pay gap has increased 1.4 per cent in the past year to 18.8 per cent, largely a result of women being underrepresented in management.

According to the ABS, women represent 53 per cent of professionals, but hold less than a third (29 per cent) of roles as chief executives, general  managers and legislators. Just 3.5 per cent of ASX200 companies have a female CEO and 12 per cent of positions  on boards of directors belong to women.

Yolanda Beattie, public affairs executive manager of the Federal  Government’s Workplace Gender Equality Agency (WGEA), says a major barrier to women is employers’ natural inclination to be  around people like themselves.

“If you have a high opinion of yourself, you’re more likely to recruit people who are like you,” she says. “It’s white, middle aged men that dominate positions of power.”

Beattie says the notion of the ideal worker also favours men. “We’re stuck in a world view  that the ideal worker works Monday to Friday, 8am to 8pm, is on the phone after hours, talking the talk, doing the  golf and tennis and client socialising and that is drawn in the shape of a man,” she says.

“Women who work flexibly are viewed as less committed and are not given the same access to promotion and pay”.

“Boys’ club culture still exists,” she says. “Women are not necessarily seen as ideally suited for cutthroat industries like finance. They are  seen as more ideal for human resources, for instance.”

According to the ABS, the financial and insurance services industry  has the largest gender pay gap, at 29.1 per cent. Public  administration and safety has the smallest, at 7.2 per cent. Munro says other ways to support female colleagues include making  after-work get togethers gender neutral rather than beers and golf,  scheduling meetings within school hours, and giving confidence  boosts.

However, the first step towards workplace equality is acknowledging the issue. A recent Leadership, Employment and  Direction Survey, commissioned by Leadership Management Australasia, finds three quarters of male respondents (72 per cent of leaders, 78 per cent of managers and 75 per cent of employees) believe it is easy for women to reach senior management positions.

“It’s time employers woke up to the massive differences in  perception of gender equality in the workplace and the potentially highly negative impact on performance and productivity in, and  leadership and management of, our organisations,” says LMA CEO
Andrew Henderson.

One sector actively trying to attract more women and lower its  gender pay gap is the male dominated transport, postal and warehousing sector.

“We need to get away from the ‘blokes in blue singlets’ stereotype and highlight the diverse range of job and training opportunities that will help encourage women to enter the industry,” SA Freight Council CEO Neil Murphy says.

To help women join the workforce, upskill or change careers,  CareerOne is hosting an Australia-first dedicated virtual careers fair  this year. The VFAIR Women at Work expo will provide  information about WGEA’s Employers of Choice for Gender  Equality, job and training opportunities, as well as resources and support. It will run from June 22 to July 2 via careerone.com.au.

Tweet
Featured Resource
Are you an employer of choice?