Spotting a Fixture over a Fad 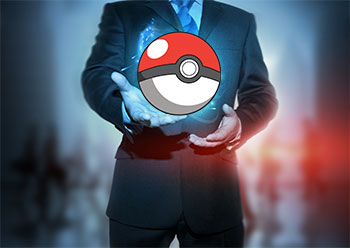 Unless you’ve recently been living under a rock, it has been nearly impossible to avoid hearing about ‘Pokémon Go’. The augmented-reality mobile game has kept players rapt since its release on July 6th and is now available throughout dozens of countries around the world.

The accelerating success of the gaming experience has been felt throughout various industries and communities including the financial, technological and small business worlds. Opportunistic businesses and entrepreneurs are sitting up and paying attention to the game, with many seeing the potential to capitalise on the craze and the seemingly permanent fixture of augmented reality in the future.

Whether you’re a Pokémon fan or consider it to be trivial or irrelevant, the fact remains that the roll out of this type of mass interactive phenomena is currently taking the world by storm. Game enthusiasts are coming forth with declarations that playing it has drastically increased their mental and physical health. Conversely, opposition to the game has been coming from concerned safety groups, transport officials and anxious parents. The very fact that the game is so polarising indicates that it has captured and so far sustained everyone’s attention. However, many are also asking the pertinent question that comes along with any fad or trend: Does it have staying power?

As it is the craze on everyone’s lips, it seems pertinent to ask this question along with a relevant follow up for those looking to capitalise on its questionable staying power: How do you spot a fixture from a fad?

When choosing to get on board with a successful trend, it is essential that you make an informed business decision that weighs up the effort it takes to get involved, versus the long-term pay off of taking a leap into popular waters. Looking at ‘Pokémon Go’ as an example, there are a few things that may swing a current fad from the ‘hot’ to ‘not’ category.

One of the key aspects of the mobile marketplace is the speed at which it moves. Currently, ‘Pokémon Go’ is in a league of its own for virtual reality mobile applications. That all may change with the introduction of newer, faster and more engaging gaming options from future developers. Before choosing to take your own leap of faith into a trend, look a bit more closely at the competition on offer. If you see only a monopoly helping the fad along, it may pay to wait out your decision to join in and stick it out for the next game changer to come along. Better yet, if you are able to be proactive and think outside the confines of the current fad, go for it. Applying an entrepreneurial mindset to the current fad could help to set you apart from the trend in the long run.

The funny thing about fads is that they often by their very nature have a short lived lifespan. While there is no exact science to determine when a hot trend will tip over into the passé, it is useful to apply a healthy level of scepticism when it comes to dramatic trends. As soon as ‘Pokémon Go’ went public, the Internet exploded. In a short period of time, the game became one of the most-discussed topics on the web and the most downloaded app of all time. While the growth for Nintendo has been unprecedented, every bubble has a point of popping. When something has the success rate the game has experienced, the frenzy will eventually reach saturation point. Being wary of this particular life cycle of fads will ensure you aren’t caught on the losing end of engaging with a fad, namely by being seen as simply another follower riding the tide of popularity instead of engaging with people using your own appeal.

By all accounts, ‘Pokémon Go’ is changing the way we think about the diversity of the marketplace for gaming and the most innovative ways to reach that market. The appeal of the game to fans of the original incarnation of Pokemon along with those completely unfamiliar with the cartoon has opened up the marketplace in a way very few products or services experience. The potential for universal appeal crossing cultures, language and class gives ‘Pokémon Go’ a very real edge as a likely fixture of international gaming. If a trend and its appeal are based on more than a couple of pockets of interest and a few very defined sets of markets, then it likely has a bit more staying power in the long run.

Whether ‘Pokémon Go’ is able to maintain its current rate of acceleration is still to be seen. It has yet to reach a point of global roll out as of the middle of July. Regardless of whether it is a fizzer or a fixture, the game has demonstrated the seemingly inexhaustible power that intuitive design and online interaction can have over a global audience.

From an ongoing business perspective, the ability to capitalise on the game platform is already apparent. The structure of the game and the various purchases within the app allows proprietors to attract foot traffic of players without any effort – players flock to them for rewards and to battle other players – and they can be leveraged for sales with the right approach. Even if the game is simply a fad and isn’t driving foot traffic in 6 months or a year from now, businesses who take advantage of the current phenomenon will be remembered fondly by those customers who had an enjoyable experience during the high point of the game. In terms of building strong relationships, this is an unprecedented opportunity to solidify strong emotional bonds with new customers, with very little effort or money.

So while trends are difficult things to pin down and properly predict, there is one thing to keep in mind: the next big thing is potentially just around the corner, waiting to be caught.