The donkey in the well 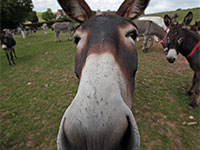 One day a farmer’s donkey fell into a well. The farmer frantically thought what to do as the stricken animal cried out to be rescued.

With no obvious solution, the farmer regretfully concluded that as the donkey was old, and as the well needed to be filled in anyway, he should give up the idea of rescuing the beast, and simply fill in the well.

The farmer asked for his neighbours help, and before long they all began to shovel earth quickly into the well. When the donkey realised what was happening he wailed and struggled, but then, to everyone’s relief, the noise stopped.

After a while the farmer looked down into the well and was astonished by what he saw. The donkey had discovered that by shaking off the dirt instead of letting it cover him, he could keep stepping on top of the earth as the level rose. Soon the donkey was able to step up over the edge of the well, and he happily trotted off.

Life tends to shovel dirt on top of each of us from time to time. The trick is to shake it off and use it to take a step up.