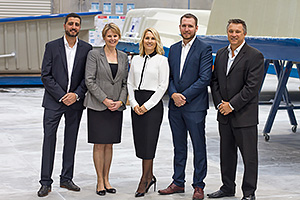 The viability of Australia’s manufacturing sector is going to depend on finding ways to increase productivity, international competitiveness and eliminate waste.

Manufacturing accounts for 6.8% of the economy and employs more than three times as many people as the mining sector. Government policy and media commentary has tended to focus on bailouts for large manufacturers, rather than reform initiatives aimed at improving operational efficiency.

One company driving change in this sector and producing positive results is Think Perform. Think Perform is part of the Thrive Alliance group of companies and a certified provider of Lean, Continuous Improvement and Operational Excellence training. Unlike most other RTOs, which simply deliver off-the-shelf training courses, Think Perform immerses itself within a business, identifies inefficiencies and then develops and implements a program to increase productivity.

For family-owned WA-based swimming pool manufacturer, Aquatic Leisure Technologies (ALT), Think Perform underpinned a wholesale transformation of its operations. ALT is one of Australia’s largest manufacturers of fiberglass pools and had been producing them in much the same way for the last forty years since the business started. With increasing competition from manufacturers in Asia and other countries, as well as concrete pool makers, ALT knew it needed to change and change quickly. ALT had even considered shifting manufacturing offshore to remain competitive, but as a family owned business it wanted to keep producing pools in Western Australia.

The company was familiar with so-called “Lean” management, which is perhaps best associated with Toyota’s production system. Lean management is about delivering quality goods and services at the best possible prices as quickly and efficiently as possible by eliminating waste, smoothing out production issues and empowering workers.

ALT built its new factory with Lean principles in mind and partnered with Think Perform to drive change at every level of the business. When ALT came together with Think Perform it had already started on its Lean journey with the launch of ‘The ALT Way – Business Excellence Initiative.’ ALT had already been exporting pools for more than 30 years, but the transformation program established the foundations for ALT for further expansion in overseas markets.

Importantly, reform at ALT would not have been possible without the Chamber of Commerce and Industry of Western Australia (CCIWA) and the role it played in convincing State and Federal Governments of the need to continue supporting these types of industry transformation programs. With on-going Government support for initiatives aimed at driving operational efficiency, both CCIWA and ALT believe Australia’s manufacturing industry can prosper and once again be internationally competitive.

It has been unfortunate for the entire training industry, as well as the beneficiaries of these programs, that a few unscrupulous operators have tarnished the reputation of the sector.  However, in line with results being displayed from clients such as ALT, there are providers such as Think Perform who are delivering quality outcomes. Countries such as South Korea and Japan have demonstrated that even in a high labour cost environment, they can establish a competitive advantage in manufacturing through increased efficiency and productivity.

Is your team functioning effectively? Many team members and team leaders have not asked themselves this question or honestly answered it. Many know that their ...
Download here
Featured Testimonial
Kim Plater - AAP Industries
Kim Plater, Sales Manager at AAP Industries explains why they chose LMA over other traditional training providers. Furthermore, Kim will ta...
Read More
Inline