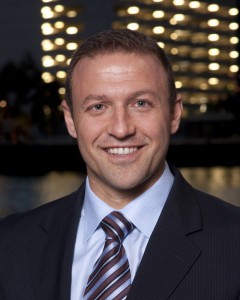 Appointed as CEO of Leadership Management Australia (LMA) in April 2011, Andrew Henderson has a clear vision and strategy for the group. Under his leadership, LMA is undergoing rapid growth and consolidation of its position as the thought leader and pre-eminent provider of leadership and management development solutions throughout Australia and New Zealand.

Andrew joined LMA in 2007 and believes his role as CEO is made easier by the organisation’s longevity and past performance. “LMA has been established 40 years and is a highly respected provider in the market place. Our reputation, the people we have on board, the product we provide and our unique development process position us as the leader in our field,” Andrew says.

To drive growth and profit, Andrew believes one of his key responsibilities is to create an environment which motivates and inspires individuals to contribute their part in executing the group strategy.

“Many businesses have a vision, state a purpose and have a strategy. Unfortunately, that’s where it ends. Far too little time and attention is given to executing the strategy and breathing life into the ideas.”

An innate ability to assemble and develop high performance teams has underpinned his success as a business owner and senior corporate executive. As a major stakeholder in four previous businesses, including a mortgage origination and broking start-up company which grew to employ more than 100 people in 3 states, Andrew has an unwavering belief in the potential of people to grow, develop and contribute.

Andrew believes LMA has an exciting future ahead of it. A future which is underpinned by a true win-win-win relationship. “LMA’s success is intrinsically related to the success of participants in our courses. The better they do, the better our client organisations do and in turn, the better we do.”

Tweet
Featured Testimonial
David Burlew – Adeal
CEO of Adeal, David Burlew, discusses how the unique LMA approach was implemented to overcome a number of organisational challenges. He des...
Read More
Featured Case Study
Foot Locker Asia Pacific
The Issue Footlocker Asia Pacific was keen to explore a cutting edge leadership program that was going to take them to the next level. The...
Read More
Inline